This study was conducted to estimate the effect of broccoli by-product (BB) as one of the promising feed additives on nutrients digestibility, growth performance of New Zealand White (NZW) rabbits, carcass characteristics as well as some blood parameters, caecal activities and economic efficiency were studied also. A total of 48 weaned rabbits at 6 weeks of age, with average body weight 747.92 g were used in this work. Rabbits were individually housed and fed the experimental dietary treatments using a complete randomized block design, where they were randomly assigned into three homogeneous groups (16 each). Three experimental dietary treatments were designed by using the basal ration with the addition broccoli by-product at 0.0, 1.0 % and 3.0 % levels of (CFM) for control (G1) and the two tested rations (G2) and (G3), respectively for 8 weeks as an experimental periods. The basal diet was formulated to fulfill the necessary requirements of growing rabbits. Results revealed that digestibility of most nutrients and feeding values were significant (P<0.05) higher for both tested rations (G2 and G3) than those of the control one (G1). In the meantime, insignificant difference was observed in digestion coefficient of (CF) among the experimental rations. Ration G3 showed significantly (P<0.05) the highest values of live body weight, total weight gain and feed intake followed by ration G2 versus the lowest values that recorded with control one (G1). Also, feed conversion and performance index were improved by the tested rations in comparison with those of control one, but the differences were not significant. Regarding carcass characteristic, group G2 and G3 showed significantly (P<0.05) higher weights and percentages of empty carcass (with head), giblets and dressing than those of the control one (G1). Similar trend was observed with the measurements of edible giblets (liver, heart and kidney) among the experimental treatments. Better economic efficiency was markedly improved due the addition of broccoli by-products as an additive source especial at the high level (G3). Blood biochemical constituents and caecal activities as pH, TVFAs and ammonia-nitrogen were also investigated. It can be concluded that up to 3.0 % BB can be fed to growing rabbits with no negative impact on digestibility coefficient, physiological functions, productive performance, carcass characteristics, cecum activity or economic efficiency. 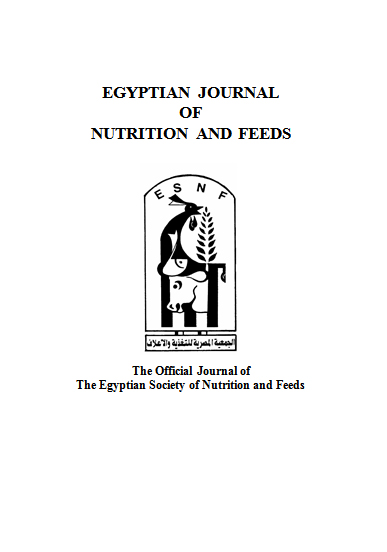